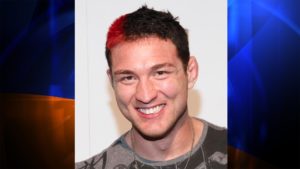 An Orange County Superior Court acquitted former mixed martial arts fighter Jason “Mayhem” Miller of felony domestic violence charges. According to a news report in The Orange County Register, jurors determined that Miller did not beat his ex-girlfriend in his Mission Viejo home in 2013. The jury deliberated for about an hour before finding the 36-year-old ex-MMA fighter not guilty of two counts of domestic violence. He was also found not guilty of a misdemeanor charge of violating a restraining order. Had he been convicted, he could have faced up to five years in prison.

Prosecutors accused Miller of beating up his then-girlfriend on two occasions by presenting photos of bruises on the woman’s legs and her testimony during the trial. One of the jurors said after the verdict that the former girlfriend never showed proof of injuries that would have been consistent with her accusation that Miller repeatedly punched her in the face. The defense attorney portrayed the woman during the trial as “lying and manipulative” and that she was jealous over Miller’s desire to see other women.

He also pointed out inconsistencies in her testimony including lying about whether Miller had spit on her and whether she had injuries to her face. She accused Miller of punching her in the face but had no evidence of facial injuries other than two scratches she later told officials she might have accidentally inflicted on herself. Miller expressed tremendous relief at the verdict after carrying the burden of being “an abuser” for the last three years. Miller has had several other run-ins with the law recently, but his lawyer has attributed those to his struggle with depression after the false domestic violence accusation.

When you talk about “fearing harm,” that is an extremely subjective standard and one that many men may struggle to defend because men are often perceived as the aggressor in a male-female relationship. All a man may have to do is raise his voice or hand or make a gesture that could be perceived as a threat. False domestic violence accusations might occur due to a variety of reasons. But the most common reasons include divorce and child custody battles, jealousy, and revenge.

What to Do if You Have Been Falsely Accused

Often it doesn’t take much for a judge to grant a temporary restraining order to a woman when she says she feels threatened physically. All it requires to get a restraining order is what is known as “preponderance” or an examination of the evidence. However, once such a restraining order is issued, the entire complexion of a divorce case could change. It could be a way for the woman to force the dad out of the home and away from his children to give her the edge in getting custody.

Men face the brunt of these types of actions because they suddenly find themselves having to find a place to live, faced with the prospect of paying child support and alimony. This can be financially devastating. Even if the charges are eventually dismissed, it can affect the life of the man down the road because temporary orders may show up criminal background checks, potentially hampering future jobs and other opportunities.

If your spouse files abuse charges and gets a temporary restraining order, it is important that you act immediately to mitigate the potential damage to your case. The steps you take at this time could go a long way in helping you get the charges dismissed and clearing your name.

• Contact an experienced Orange County domestic violence attorney right away and fill them in on all the details. Provide your attorney with any details you may have on the charges leveled against you. It is ideal to contact and retain and the services of an attorney as soon as possible so he or she can get a jumpstart on the case and start devising a solid defense strategy.
• The next step would be to start compiling all the evidence you need. This might include phone voicemail messages, photographs, video and audio recordings, emails, text messages, etc. This could be extremely helpful if you can show that your spouse threatened to file false charges to spite you or for some other reason.
• It is also extremely helpful to have witnesses in your corner who can help corroborate your accounts of what happened. It could be particularly beneficial if these witnesses were present during some of the incidents brought up by your spouse or if they could testify to your character.
• Last but not least, it is important to stay calm and maintain your composure during your hearing. This may be difficult when false charges are being leveled against you. But remember that getting angry or raising your voice might work against you.

How a Defense Lawyer Can Help

Those accused of domestic violence could face significant consequences. Even a first-time misdemeanor conviction could fetch you a minimum sentence of 30 days in county jail. Those convicted will also be required by the court to attend a yearlong domestic batterers class. If you are convicted of felony domestic violence you could face up to four years in state prison and a permanent strike on your record under California’s Three Strikes Law.

A domestic violence lawyer in Orange County at the Law Offices of Randy Collins can help you get acquitted of the charges. We will protect you from a conviction that could go on your criminal record and ruin your chances of getting a state license or gainful employment in the future. We will do everything we can to get your charges dismissed or reduced.

We have successfully defended many clients who have faced false domestic abuse charges. Regardless of whether someone has accused you out of jealousy, anger, or spite, or to get the upper hand in a divorce proceeding, our knowledgeable lawyers will fight for your steps every step of the way and strive to help you achieve the best possible outcome. Call us at for a free, comprehensive, and confidential consultation.