When I say domestic violence, what do you think of it? Chances are, you imagine a situation where a woman has been physically assaulted by a man. Truth is, there are thousands of instances where men silently suffer beatings by their girlfriends or wives, but we rarely hear their stories. Surveys are beginning to confirm what male victims of domestic abuse have been experiencing for some time: a steady increase in instances of physical abuse by their wives or girlfriends.

Personally, I have heard both sides of this story. As a domestic violence defense attorney in California, I have worked with countless individuals who face criminal charges for abuse who claim that they have suffered at the hands of their loved ones. In many of these instances, my clients claim that their relationships had resorted to physical abuse by both my client and their loved one. They attribute their criminal charges to bad luck. Their girlfriend, boyfriend, or spouse contacted the police during an incident in which my client was the aggressor, so they feel that they should have called the police in prior altercations in order to avoid an arrest and possible conviction on their own record. 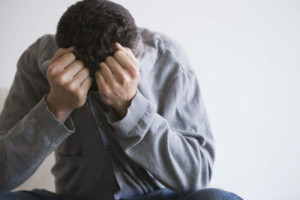 Domestic violence against men happens more than you might think, but some instances go unreported. Why would a man avoid reporting incidences of abuse to the police? There are several reasons, the most common being an embarrassment. A 250-pound man suffering from physical abuse at the hands of his 120-pound girlfriend or wife can be a very embarrassing situation. Also, police are far more likely to arrest a man during a domestic violence dispute than a woman. Unfortunately, physically abused men have more difficulty convincing authorities that they are being abused and once the courts have labeled him as being the abuser, it becomes very difficult to convince them otherwise.

Why Men Stay in Abusive Relationships

1.Shame
Societal expectations of men are not a thing of the past. Men and women have certain expectations of themselves in a relationship. If they fail to meet their own expectations, a debilitating cycle of shame can crush any remaining self-confidence and/or self-respect that they have left. A man who feels that he has failed as a protector and provider for himself and his family can suffer an emotional toll that can be more harmful than any physical beating.

2.To Protect Their Children
Men who leave an abusive relationship that involves children face an uphill battle. To keep the kids away from their abusive mother, the abused father would need to convince the courts that it is in the children’s best interest to live with dad. If there is not enough evidence to do so, many men may feel that they have an obligation to their kids to stay in the relationship with their abusive mother to help protect the kids.

4.Religion
For some, marriage is an unbreakable promise. For these men, staying with their spouse is more than a choice. It is their future whether they like it or not.

Those who are suffering from domestic violence at the hands of their loved ones are encouraged to contact the Domestic Violence Hotline to speak with someone about their situation. Call 1-800-799-Safe to speak with one of their representatives.

Those facing charges for domestic violence in California can obtain a free case evaluation from a skilled domestic violence defense attorney by calling . The call is free and there is no obligation to retain legal services.